The collision group manager components are used in a collision pipeline.

The role of a collision group manager is to find and merge solvers for a contact, i.e. two different objects in collision, into groups. The term ‘group’ refers to a group of integration components. It includes an ODE solver, its associated linear solver and the constraint solver. DefaultCollisionGroupManager modifies the scene graph so that two objects in contact share the same node with a single integration algorithm. In that case, the integration algorithm solves the ODE of the two objects simultaneously.

In DefaultPipeline, groups are created only for contacts between two non-static objects.

After creating the groups, DefaultCollisionGroupManager is also in charge to create the contact responses.

Similar rules also exist for the linear solvers. For example, if two conjugate gradient solvers are merged, the maximum number of iterations will be the highest value of both solvers.

Interaction with Other Components

The following function must be called in the collision pipeline, once contacts have been detected:

The following components are collision group managers, and can be placed in a simulation scene: 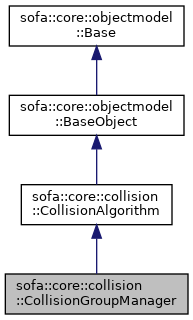