There are many ways to improve the performances of a simulation. This page provides a few tips to help achieving this goal.

On Windows, the two following CMake variables may speed up the simulations:

Let us take the example of the caduceus demo, located in examples/Demos/caduceus.scn. The following image results from the profiling of one time step, measured in the GUI of runSofa. 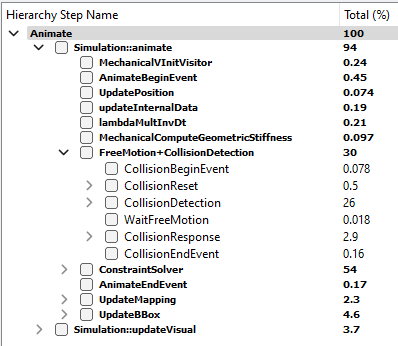 Two major steps can be identified:

Together, both steps account for 84% of the total computational time spent in the simulation step. In most simulation, those two steps will be the most time-consuming.

As the name suggests, the step FreeMotion+CollisionDetection gathers two substeps:

These steps and their associated timers are specific to the FreeMotionAnimationLoop. Its particularity is that those two steps can be computed in parallel. It is the case in the example: collision detection takes 26% of the time. During that time, the free motion is computed in parallel. That is why the timer WaitFreeMotion is almost null. This parallelization is a possible solution to optimize the performances of this simulation. This parallelization is available because the computation of the free motion is also a time-consuming step of a simulation.

To summarize, the 3 major steps of a simulation, candidates for being a bottleneck, are:

In each of them, some substeps can be responsible of the bottleneck. The profiler helps identifying the one(s) . In the above example, the most time-consuming step is constraint solving, taking 54% of the time.

If collision detection has been identified as a bottleneck, here are a few tips to improve the performances:

This tip requires to use a FreeMotionAnimationLoop.

The Choice of the Linear Solver

See this page for a description of the different types of linear solvers.

The error reduces at each iteration of an iterative solver. Some of the parameters (e.g. iterations, tolerance and threshold in CGLinearSolver) controls when the solver stops its iterations. Less iterations means less computation, therefore faster simulations. Stopping too early can come at the price of too large error, and can even bring instabilities. With iterative solvers, finding an appropriate trade-off between accuracy and efficiency is key.

When the linear solver assembles the system matrix in a compressed sparse row data structure, it is possible to use a matrix where the entries are blocs of 3×3. This is much faster to assemble. It is the most efficient when the simulation only involves 3 degrees of freedom per node (known as “Vec3d” in the SOFA template). The template parameter to use is CompressedRowSparseMatrixMat3x3d. Note that all solvers do not support this template parameter.

This optimization requires to use a FreeMotionAnimationLoop. When multiple objects evolve in a simulation, SOFA supports the following configurations:

In the latter case, there are as many free motion computations as the number of ODE solvers in the scene. In this first step of the FreeMotionAnimationLoop, the free motion assumes that objects can have a “free” motion, thus ignoring possible interaction between objects. Therefore, the computation of the free motion of an object is independent from the others, and each ODE solve step can be trivially parallelized. The component FreeMotionAnimationLoop has boolean Data parallelODESolving to specify if both ODE solve steps are to be computed in parallel or not.

A data computeBoundingBox is available in all AnimationLoops defines whether the global bounding box of the scene is computed at each time step. Setting this data to false will avoid the recomputation of the bounding box used for rendering, thus possibly saving computation time.

In SOFA, Model Order Reduction is a technique to reduce the computational complexity of a FEM simulation. It works with a premilinary step which precomputes deformation modes of an object. The modes are then used online, during a simulation, allowing to build and solve the same FEM problem in a reduced space, in order to dramatically increase the performances.

This technique is available in a plugin: https://github.com/SofaDefrost/ModelOrderReduction. Binaries are also available.