How to use the SOFA GUI (Qt)

To start the simulation, press Animate – the simulation speed in frames per second (fps) and the advancement of the simulation time in seconds (s) will show up in the left bottom corner. If there is a need for a simulation with a lower or higher detail of the time, then adapt the parameter dt. A stepwise advancing of the simulation with the stepsize dt can be achieved by clicking on “Step”. In order to restart the scene use “Reset Scene”. The camera of the visualization on the right hand side of the executable is controlled by the mouse movement and the:

The camera position and orientation can be saved and recovered using the Save View and Reset View buttons respectively. A running simulation can be manipulated with the mouse movement, when clicking on the left mouse button and pressing the shift key. Further uses of the keyboard can be found in the tab “Viewer”:

By default, Video recording consists in dumping each frame of rendering (so even if the simulation is paused, it it will record if you are moving the camera) in PNG (lossless). All frames are recorded in %{SOFA_DIR}/share/screenshots. If the folder does not exist, it needs to be created. If you wish to make a video with those images, you can use your favorite encoder (ffmpeg, libavi…). After pressing the “V” key in your interface, you should see something like that:

And the dumped PNG files will be located in the designated folder. Dumping will be stopped either if you quit the process, or press “V” again.

You can choose instead to directly record a video using an external ffmpeg executable. This is not really recommended as you will not have a total control on the input, contrary to the previous way, i.e dump frames + using your own tool with your options.

If it is still okay for you, you will need first to download ffmpeg on your system and tell SOFA its location by different means: 1. you set your system PATH with ffmpeg inside (it will the best choice for the Linux users) 2. you put ffmpeg(.exe) directly alongside runSofa (easiest solution) 3. you set the directory where ffmpeg is. Edit %{SOFA_DIR}/plugins/SofaGuiQt/etc/SofaGuiQt.ini and set the value of FFMPEG_EXEC_PATH

Then in the interlace, you need to select the choice of writing directly a video file (Menu->Edit->Video Recorder Manager) 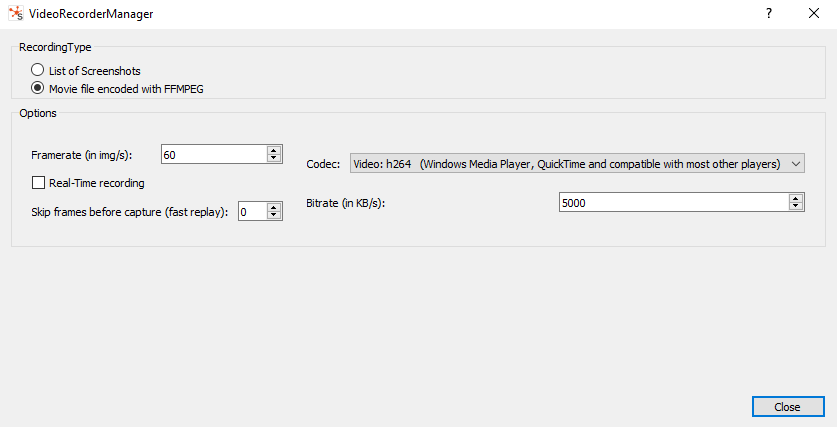 If everything is OK, you should see that in your console, when pressing the “V” key:

When you wish the finish, press “V” again and ffmpeg should close the file.

and can obtain your video in the %{SOFA_DIR}/share/screenshots.