Now let’s take a look at the scene file. Scene files are XML files that describes the scene graph for the simulation. By convention, scene files have extension “.scn”. You can find example scenes in the %{SOFA_DIR}/examples/Demo/ folder. This is where you will find the “caduceus.scn”.

As you can see, the content of a scene file is written in XML.

To create the simulation tree, you need to create a scene graph using the XML format. XML is a very simple language that allows the hierarchical description of a graph. Each element contained between chevrons are called “Tags”. There are 2 types of tags: Nodes, and Leaves.

In terms of simulation, the Node tag is used to create a hierarchical level of modeling (e.g behavior model, collision model, visual model etc.). A scene file always contains a root node, that encapsulates your whole graph, and defines some overall specificities for your simulation (e.g gravity, dt, …):

Nodes can be nested, as it is the case with every nodes inside the root node, allowing you to separate the different parts of your scenes. Nodes by themselves though, are useless, unless you combine them with some of the large collection of components available in SOFA. Those components are “leaves”, meaning that they cannot be nested. Leaves, must be contained inside the root node, or any other nodes in the scene graph.

As you can see in the scene file, nodes and components can have properties. In SOFA, xml properties are called Data, and allows you to access, and change some properties of the component it belongs to. This way for instance, a node can be activated or deactivated by setting its boolean data field activated to “true” or “false”. Those data are the same parameters that you can find and modify in the “property” sheet of runSofa’s interface. 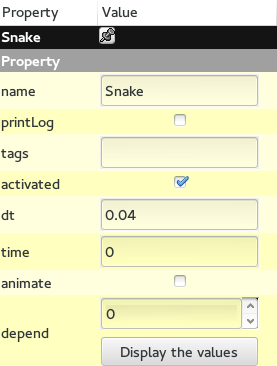 Moreover, dependency between Data containers of same nature can be speciﬁed in the XML scene ﬁles, indicating that the content of one container should be copied from the other, making the scene description fairly simple and above all efﬁcient. To create this dependency, the flag “@” follow by the name of the source component should be used, as in following example:

The example above links the whole component “myLoader” to the property “src” of the component “myMesh”. But it is also possible to link more specifically the data of a component to the data of another one, again, as long as those data are of the same type:

The example above also shows the possibility to link to a component located in an other node. Here, the component vtkLoader is not located in the same node as the mechanical object component. by using “../Loader/” before component’s name we want to link with, we are going up from one node, search for the “Loader” node, look for the component “vtkLoader” in it, and finally link with its data labeled “position”

Important note: It is not possible to link to a component that has not been yet declared in the scenegraph. In other words, a component in the XML file only knows about the components declared earlier in the file.

It is possible to include other xml files inside your scn file. This allows you to fragment your code to get a clearer and cleaner view of your scene. This can be achieved using the tag. For instance, the “caduceus.scn” could look like this:

You would have the rest of the scene graph declared in two other files: