A Mouse Manager has been created in Sofa, allowing to easily create and change the interactions with the different buttons of the Mouse. Note that the Shift key needs to be hold during the operation.

This panel is available through: Edit -> Mouse Manager 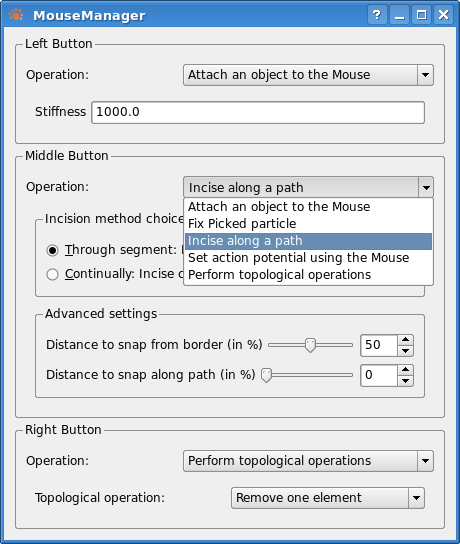 The basic interactions are from now (see below parts for further information):

Attach an object to the Mouse

when clicked, the mouse casts a ray, and create a spring between a point in the ray, and a DOF encountered (if one has been found in the proximity of the ray) When clicking on shift, collision model will appear (first figure), Then clicking with button mouse without releasing shift will allow to move selected dof (second figure). Then, releasing mouse button will let the object come back to it rest position (if the mechanical behavior allows it). Whereas releasing shift first will freeze the object in the current position.

Incise along a path

This operation allow to simulate incision on a triangular mesh. There are two methods available for performing incision:

For surface collision model: On a surface mesh it will remove a part of the mesh

For volume collision model: 1. Using the Volume option will have the same results as above (remove a sphere volume of elements) 2. Using the Surface option will remove a layer of element at the surface of the mesh (see fig)

Add a Frame to Skinned model

<< Inspect components Use SOFA in Matlab >>